I've decided that it's time to move to a new blog.  I'm really excited about it and I'm hoping that the few of you that read my blog will follow me to www.notenoughdevotion.blogspot.com
Posted by Gretchen at 10:21 AM No comments:

How to meet and make friends with the neighbors

But for now, I'm really enjoying meeting the neighbors.  The neighbors on either side of us and across the street are awesome people who all have a dog (or dogs) and a kid (or kids).  We'll know where to go when we need advice for either!
Posted by Gretchen at 4:31 PM 1 comment:

Last night, Andrew and I were invited to Carrabba's for a wine tasting and dinner that on the owner!  It was amazing.  We sat at a table with about five other couples and the owner of the local Carrabba's and ate and drank so much!


We tried two appetizers, three entrees (including clams, which we'd never eaten before), and cannolis for dessert.  We also tried three wines, a prosecco, a pinot grigio, and a merlot (which of course was my favorite because I like red wine much better than white).  The food was delicious.  My favorite thing we tried was a new appetizer that was simply grape tomatoes and mozzarella on skewers with balsamic vinaigrette and pesto on the side.  I would eat that and only that for my entire meal.  Well, that and maybe some dessert, but I don't want to think about that right now because I'm STILL stuffed!
Posted by Gretchen at 7:25 AM 2 comments:

Look at what we'll be seeing on our honeymoon! 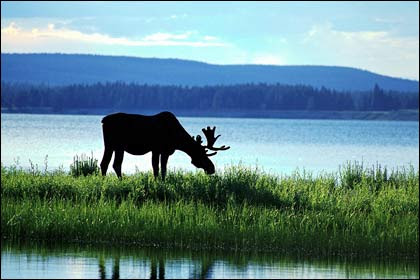 That's right!  One of the first things we're going to do in Maine is go on a moose safari.  Ever since I learned there was such a thing I've been dying to go, and now I'll finally get to!  We're going through a company called Mainely Photos in Millinocket, Maine.  The company is run by two professional photographers who give you a money-back guarantee that you see at least one moose.  I can't wait!

Image from this site
Posted by Gretchen at 11:52 AM 3 comments:

At the start of summer

Well, summer is officially here!  And even though I'm teaching summer school, it's so nice to have a bit of a break.  The students in summer school always work really hard because they know that when they finish the class they're working on they don't have to come to summer school anymore.  We're not even a week in and I already have three students finished!

Other than teaching summer school, I've been working around the house.  We still have some stuff to move over from the apartment, but we should get that taken care of in the next week or two.  Right now, we're just having fun figuring out where everything should go.  We're also working our way through redoing the flowerbeds that the previous owners covered with a layer of plastic and then three to four layers of river rocks.  In order to be able to plant anything, we have to get rid of the plastic and rocks first, which is about as much fun as it sounds like it is to move...

I'm also working on planning our honeymoon.  At this point, we're thinking of flying into Boston and spending a day or two there.  Then we'll either rent a car and drive or take the train up to Portland, Maine.  We'll hang out there for a few days, traveling a little south to see some of the smaller towns (including Kennebunkport which I'm really excited to see!) and then head north towards Bar Harbor and Acadia National Park.  On the list of things to do while in Maine:  see as many lighthouses as possible, see lobster, try lobster (neither Andy or I has ever had it), go whale/seal/puffin watching, go on a boat, and I'm sure there are some other things that I'm missing.  Anyway, if anyone's been to Boston/Maine I would love some suggestions of things to do/places to go.

On a completely different note, has anyone ever been to When Eddie Met Salad?  I went today for the first time and it was AMAZING!  I had the Sante Fe chicken wrap, which is not something I would normally get but it was so good.  I can't wait to go back and try some of the other food there.  Just thought I'd mention it in case any of you have been passing it by like I had until today.
Posted by Gretchen at 11:13 AM 1 comment:

So we've moved into our house and completed a bunch of projects already.  I know that I haven't shared pictures of the house (which I should be doing later this week!) but I do have pictures of our projects!

Project 1 - Moving a HUGE entertainment center we bought off of Craigslist.

I enlisted the help of my mother, sister, and husband to make this happen because there was no way that I could do it on my own.  It was a great buy because it's made by Bombay Company and the whole thing is solid wood.  It's a beautiful cherry color that will look great when we get all of the shelves filled and when Andrew gets to eventually buy his bigger and better TV.
Project 2 - Priming the walls and ceiling of the garage.
Our garage has drywall on the walls and ceiling, but didn't have any kind of primer or paint on it, so we decided that we wanted to put a coat of primer on it to help seal it and keep out any moisture.  Besides, what doesn't look better with a good coat of white paint or primer?

Project 3 - Brightening up the front porch with our kissing Dutch people and a hanging flowerpot.
Back when we were still looking at houses, I found cement kissing Dutch people on Craigslist, bought them, and repainted them so that we could put them somewhere in front of our new house, whenever we managed to get one.  So this weekend, we were finally able to put them out on the front porch and they look great!  We added a cute purple hanging flowerpot that we bought at Meijer and some flowers that we planted this afternoon and the porch looks much brighter and happier than it did this morning! 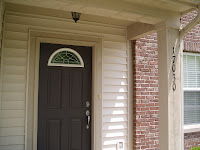 Project 4 - Redoing the flower bed by the light post.
Our last project this weekend was redoing one of the flower beds.  First we removed the ugly edging the former owners had.  They we changed the shape from a square to a circle to make it easier to mow around.  We used some of the small river rock that is in most of the other flower beds as a new edging and added some flowers!  I think it looks so much better!

Now that we know that we're moving in a week, I was really excited to go to some garage sales!  We have so much more room in our house than we do in our apartment and, while I didn't expect to find tons of stuff, I thought we might find a few things for the house.

After hitting about 8 garage sales (and not being able to find one that we were trying to go to because they didn't have any signs!?!) we ended up with a copy of the dvd Signs.  I honestly don't like the movie that much (mostly because the idea of aliens really freaks me out), but I'm talking about crop circles in one of my classes and this movie is an obvious choice to show.

The other things we got were some really cute postcards that look like they're made out of cardboard that say "We've moved!  We're living out of boxes!"  They'll be perfect for letting some of our older friends and relatives who aren't into email or Facebook that we've moved and tell them our new address.

Can you tell I'm really excited about moving?
Posted by Gretchen at 8:11 PM 1 comment:

"If you could envision the type of person God intended you to be, you would rise up and never be the same again." -Anonymous

"You rock, rock." -I Heart Huckabees

"We're at the Coffee Bean and there is no solution." -Bewitched